An Independent look at Fleckvieh in the UK

The First farm we went to was in Eberl, Sauerlach. Their farm was fantastic Zero-Grazing system with an average 10,000kg plus of milk.

As with most Fleckvieh breeders, this farm would never select based on milk production but on Fitness. This selection policy was clearly paying off as it was almost the case of spot the cow that hadn't produced 100 tonnes of milk!

Another point that was Made clear was that if in the heifer lactation they were producing too much milk (usually around 8,000kg) they would sell them at market. The reason for this is that they will get a great price for them by farmers wanting a quick return but also because he believed that a heifer producing too much milk will "burn out" and wont have the lifetime production that he was after.

This Part of the trip we had a tour around the Bavarian cattle research farm. Whilst we were there they were doing a wide variety of research based on housing conditions- namely the comparison between straw and rubber bedding, feed efficiency and comparing robots with traditional milking systems.

The Final part of the trip was to head over to the Munich Oktoberfest. it was a very enjoyable evening and many Steins were enjoyed!

Later that day Bayern put on a show and brought out all the bulls for all of us to see and went into great detail about all the Bayern bulls that were available to see.

Later that day we went through classification of fleckvieh and we thought that it was important that the information should be translated into an English system that we all can relate to Click here to view the classification translations.

Molecare Genetics organised a trip out to Bavaria with Bayern Genetik, on the trip we visited several of Bayern's farms throughout the whole of Bavaria including a fantastic variation of systems. 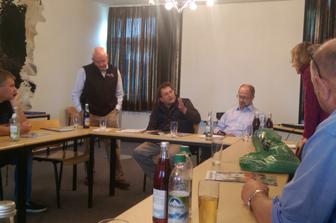 The Second farm that we went to reared their Heifers way up in the mountains and they were brought down to the farm when the winter begins and also when they are ready to milk.  Once they have Succeeded in the mountains they will be a hardy strong cow ready for milking!

This farm is well known as in this farm they have produced some of the best bulls available and growing up in these conditions you can see why!