An Independent look at Fleckvieh in the UK 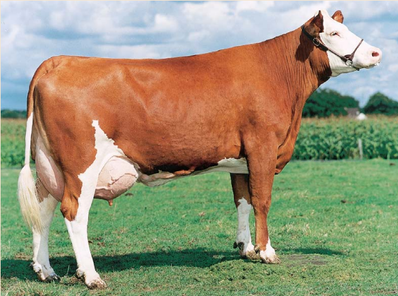 Anne – 75% Fleckvieh – one of the first crossbred cows in Northern Germany.

A quarter of a century ago crossbreeding of dairy breeds was practically unknown in Western Germany and many other European Countries. What is common in pig breeding since a long time was not even thought of in the dairy business. However, some farmers in Northern Germany started inseminating their Holsteins with Fleckvieh already 25 years ago because they were fed up with the cows they had in their barns and were looking for a way to improve the health of their dairy herd. Soon after they started crossbreeding, they noticed heterosis effects offered them huge advantages practically without paying any additional money. When they went on with crossbreeding, they realized how efficient the Fleckvieh breed is and continued with absorption cross.

From the very beginning these pioneer farmers appreciated the chances Fleckvieh offers because of the wide variance within the breed itself. One can choose from sires that are more beef type to sires that are dual purpose to sires that are dairy type. This wide variety gives you the chance to find an adequate sire for each cow. Bavarian Fleckvieh Genetics always focused on the preservation of as many bloodlines as possible to offer enough bulls with different breeding performances in different traits.

When they sold their first crossbred bull calves they were able to realize higher prices than for their Holstein bull calves and also the slaughter cows carried in high yields. The excellent fertility of the Fleckvieh cows made replacement rates of 40 % possible. The outstanding fitness and udder health led to a higher milk check because the milk quality was good and the milk contents were high. This additional income helped to cover the raising costs of a cow.

One day, one of these pioneers, Karl-Josef Vermöhlen, contacted Bavarian Fleckvieh Genetics for semen. Till that time we had never heard of the crossbreeding farms in Northern Germany nor thought of crossbreeding at all. The idea was born from the farmers themselves, in their daily practical work.

Several visits of the crossbreeding farms convinced us of the idea and made us create a whole breeding program out of it. We gathered all the experiences of the farmers that were already crossbreeding with Fleckvieh and presented a breeding program according to the principle: „stabilize milk production and realize additional income through beef”.

This means an economical superiority of the combination „milk and beef“ compared to “only milk” when all other expenses are taken into account. Today we see that the farms that started crossbreeding 25 years ago have the same milk production as their colleagues who milk Holsteins, but a higher income thanks to low costs and additional money through beef.